Abstract:
Unconscious consumer's act and neuromarketing are the most promising research areas at the intersection of Economics and psychology today. The key tools of neuromarketing are rituals, based on the study of which you can create a channel of interaction with the consumer. The article presents and systematizes the characteristics of the ritual of the brand, the conditions of its creation and methods. The authors introduced a link of human psychology “anchors“ with communication with a brand for the consumer. The indicators to assess the effectiveness of the implementation of the unconscious acts in marketing communications are proposed for the first time. The article will be of interest to specialists in creative marketing communications lying at the confluence of psychologists, sociologists and Economics. 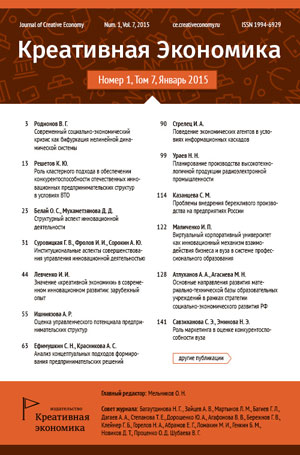